Geoff over at DDOGamer has announced the winner of their prize draw to win the last fansite hardback copy of the Stormreach Campaign.

With over a hundred and fifty entries, it’s not surprising that tracking all of the entries becomes a bit of a task and in true Geoff style the outcome had me chuckling.

DDOGamer: Announcing a ruling on the recount!

Congratulations to Kevin who won the copy and a thanks to everyone who took the time to enter whether by comment or through the haiku. Lots of great haiku entries that had me smiling that Geoff’s compiled into a single gif

The fey gnomes of Zilargo travelled to Eberron from Thelanis thousands of years ago. The demise of the Dhakaani Empire following the Daelkyr invasion allowed the gnomes to take over the ancient cities abandoned by the retreating hobgoblin and Xorian forces.

Establishing the main city states of Trolanport, Zolanberg and Korranberg, the gnomes were able to greatly accelerate their knowledge of magic, engineering and architecture from the ruins left behind by these invaders.

As the third race to manifest a dragonmark, House Sivis became the model for the other Dragonmarked Houses. The powers of the Mark of Scribing together with Zilargo’s stance of fierce neutrality has saw the gnomes become an integral part in the background of many other nations.

Unknown to many, House Sivis’ played an instrumental role in rediscovering the secrets of the ancient giant ability to bond elemental forces to items which led to the creation of the Lightning Rail and Airships.

As an introduction to their prize giveaway, Geoff over at DDOGamer sent me some questions. I assumed they were for some background to the article on the giveaway, but Geoff posted it up as an interview with some very complimentary things about the Stormreach Campaign.

Okay, it definitely wasn’t the Spanish Inquisition but happy to help out all the same.

A big thanks to Geoff for the article and the kinds words. I’ve spent countless hours over the years listening to DDOCast, reading DDOGamer and grinning along with the Cocktail Hour. Even more hours with Ron’s character planner, and more recently enjoying the fresh perspective from DDOPlayers and reading other people’s blogs via DDOCentral. Each of the copies of the hardback these folks received are well deserved. Keep up the good work.

An interview with Geoff over at DDOGamer

Geoff Hanna at DDOGamer has the last fansite copy of the Stormreach Campaign to give away. In true DDOGamer style you’re allowed extra entries if you’re willing to put in a little bit of effort.

To see how you can enter and how to make bonus entires, have a look at DDOGamer.com

Through the course of their adventures, the party assist the Silver Flame repeatedly against the forces of evil that they are sworn to oppose.

Although the Silver Flame in Stormreach are an excommunicated branch of the main Church in Thrane, by understanding the history of the Flame, the party are able to understand how the guiding principle of self-sacrifice still applies in the far flung reaches of Xen’drik.

The History of the Silver Flame

I’d like to take a minute to acknowledge those unsung heroes who often become but a bloody footnote to the main narrative. Dan Abnett became notorious for his swathes of bodies and it amused me to give a nod to a few people through the chapters.

Chapter 8: Mahk’doh is named after one of Jerry Snook’s old characters. The drow cleric initially enlists the help of the party then has second thoughts on his diminished share of the reward and offloads them on Ruat Acalay in the Marketplace. Mahk’doh’s blood smeared holy symbol is found near a pile of unidentifiable burnt corpses. Was the drow cleric among the remains?

Chapter 9: Sigfried Trent makes an appearance as a bard in The Red Devils. The focus of his attention in the robes of House Cannith turns out to be Anne Trent who makes a much more prominent appearance as Channa d’Cannith’s colleague in Birth of the Bladeforged.

Chapter 16: Talcus on Ghallanda doesn’t even make an appearance before his demise. But as a crossed out name on a letter of introduction to the Necropolis he did a fine job.

Chapter 19: Krumper on Ghallanda puts in a fine performance as a disembowled corpse on the beaches of the Sorrowdusk Isle. So much so that when people have asked about their part in the narrative, I’ve been able to reply with “At least you’re not Krumper”.

Chapter 22: Atroxes, an alt of one of the Monday Marauders, and now promoted to Platoon Leader with House Deneith offers the party some advice while on our way to Stormcleave Outpost.

Chapter 34: Sestra gets an honourable mention as purveyor of rancid gnoll meat to the inhabitants of Zawabi’s Refuge. When I thought of a name for someone who would sell the equivalent of road kill, for some reason Sestra came to mind.

Chapter 36: Irown, one of my guildmates on Ghallanda, becomes the unfortunate leader of the Silver Flame patrol captured by Brother Maldetto in The Black Prophecy.

Chapter 37: Chelena Armstrong is one of Geoff Hanna’s characters and one of the Halfling Commandos on Sarlona. When I was looking for named members of House Jorasco’s Council it seemed like a natural fit.

Chapter 40: Patrick Sherman from DDOCast makes an appearance as the wizard Shamgar, one of the Stormreach defenders facing the initial onslaught of the Droaam forces. Shamgar explains to Captain Markus that the Droaam forces are warded by unknown protections and that the battle will have to be fought on conventional terms.

Chapter 40: Amorrya was unfortunate enough to be in group with me when I needed the name for a bright-eyed, enthusiastic, youthfully naivelly sincere runner to take a message to the Coin Lords from the invasion front in the Summerfield District.

Chapter 55: A bit of a bloodbath this one. Furiyen, a former guildmate, is the first to be lost to a trapped lever. I’m sure his last words will have been “Who needs spot when you have evasion”.

Chapter 55: Samius and Lessah from DDO Cocktail Hour make a guest apperance in the party. We’re spared the grizzly details of how Lessah was slaughtered while Samius disarms one of the devils by getting it’s halberd embedded in his ribcage.

Chapter 55: Rifken and Ryggard from Ghallanda are long time quest mates on Ghallanda. Ryggard does manage to make it out of the Demon Den for a final battle while Rifken never sees daylight again.

Chapter 55: Valyho is another former guildmate who is one of the last standing while Furiyen was the first to fall. It couldn’t be any other way really. Ryggard and Valyho sacrifice themselves to allow Uriel a chance to escape to the city to raise the alarm and the party then venture on to Shavarath to seek Inquisitor Lightbringer to inform her that her sister Valyho has fallen.

Some were lost bravely, some were lost stupidly and others survived for tales still to be told. So raise a tankard of Dirty Kobold and spare a thought for those plucky redshirts. 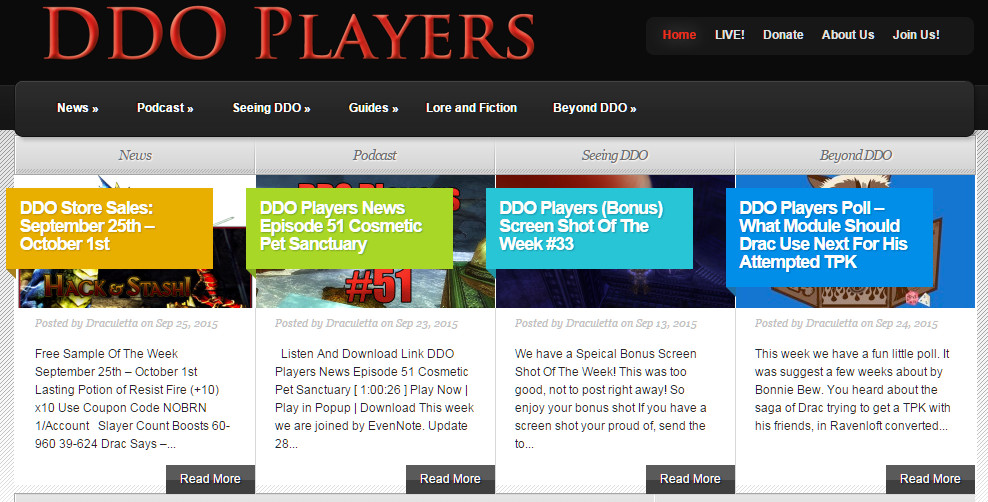 DDOPlayers have announced their competition winner. Congratulation to Saekee for the winning entry.

The party arrive in Stormreach along with refugees from Khorvaire, encountering a city unlike any on Eberron.

To appreciate the unique nature of Stormreach and the significance of the events that befall the city, we need to look back at the city’s history.

Much of the details are taken directly from The City of Stormreach source book, with additions specific to our campaign.

The History of Stormreach

As part of their episode 400 celebrations, Patrick over at DDOCast has one of the limited number of hardback copies of The Stormreach Campaign to giveaway

You can watch episode 400 over at ddocast.com to find out how easy it is to enter.

Good luck to everyone who enters.

From their first arrival in Stormreach, the party become embroiled with the city’s criminal underbelly. Long before they become the entrusted allies of the Coin Lords, the Houses, the Twelve and the Silver Flame, the party cross paths with the city’s gangs before eventually being selected by one of the city’s founding Coin Lords for a secret mission to purge Stormreach of organised crime.

From the hapless Quickfoot Gang with their cursed luck, to the Gnashtooth and Tunnelworm denizens of the Waterworks, to taking a direct hand in the intrigues of rival smugglers Hazadill and Baudry Cartamon, all paths lead inexorably to the Sharn Syndicate.

The Boromar Clan, the most feared criminal organisation in Sharn, have set their eyes once more upon the city of Stormreach. Using their influence, they make their attempt to shape the criminal underworld and unite the city’s gangs under the banner of the Sharn Syndicate.

The Gangs of Stormreach Storyline